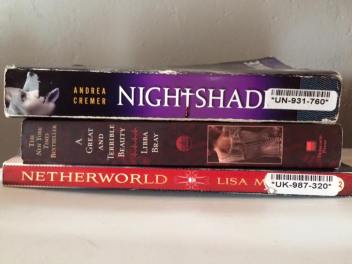 I try to attend a local library’s book sale every month so I can support them. They rely on book donations and each book purchase goes toward the funding of the library. That being said, I usually do a good amount of book buying on these, ranging from 8 books to 16 books a time. I acquire a good amount of books this way and for little to nothing.

Each book is twenty five cents a piece. Honestly, how can I not book hoard?! Even if it isn’t a great book – so what?

I’ve decided that once a month I’ll post my book haul, and while I don’t have the full picture of my haul which included the above books, these are books that I’ll be reading in January, too. You may recognize some and you may not!

In nineteenth-century Victorian England, a young widow finds that she has inherited more than her late husband’s property: The Furnavals serve as the ancestral keepers of supernatural portals scattered around the globe. When demonic entities begin crossing over from the Netherworld, Lady Diana realizes that a war is brewing, and she must be the one to confront it.

Accompanied by a young Chinese sailor named Yi-kin, her feline guardian Mina, and a mysterious scholar, Stephen, Diana will begin a journey to solve the mystery of her husband’s death and prevent the apocalypse.

A Victorian boarding school story, a Gothic mansion mystery, a gossipy romp about a clique of girlfriends, and a dark other-worldly fantasy—jumble them all together and you have this complicated and unusual first novel.

Sixteen-year-old Gemma has had an unconventional upbringing in India, until the day she foresees her mother’s death in a black, swirling vision that turns out to be true. Sent back to England, she is enrolled at Spence, a girls’ academy with a mysterious burned-out East Wing. There Gemma is snubbed by powerful Felicity, beautiful Pippa, and even her own dumpy roommate Ann, until she blackmails herself and Ann into the treacherous clique. Gemma is distressed to find that she has been followed from India by Kartik, a beautiful young man who warns her to fight off the visions. Nevertheless, they continue, and one night she is led by a child-spirit to find a diary that reveals the secrets of a mystical Order. The clique soon finds a way to accompany Gemma to the other-world realms of her visions “for a bit of fun” and to taste the power they will never have as Victorian wives, but they discover that the delights of the realms are overwhelmed by a menace they cannot control. Gemma is left with the knowledge that her role as the link between worlds leaves her with a mission to seek out the “others” and rebuild the Order.

Calla Tor has always known her destiny: After graduating from the Mountain School, she’ll be the mate of sexy alpha wolf Ren Laroche and fight with him, side by side, ruling their pack and guarding sacred sites for the Keepers. But when she violates her masters’ laws by saving a beautiful human boy out for a hike, Calla begins to question her fate, her existence, and the very essence of the world she has known. By following her heart, she might lose everything- including her own life. Is forbidden love worth the ultimate sacrifice?

Perhaps you know these books already and perhaps you don’t, if you do feel free to leave a comment below and chat about it. If you don’t be sure to read the reviews once they’re up.