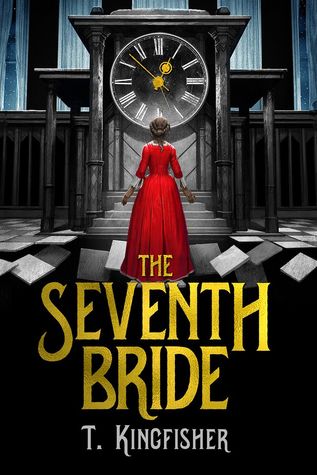 I received this book through netgalley in exchange for an honest review.

This is a delightfully creepy little gem that was found and I rather enjoyed it.

This story is loosely based off of Bluebeard and his delight in harboring wives and killing them, except sometimes in this story they don’t always die.

Rhea is an unassuming miller’s daughter who often finds herself a victim of an ornery swan and has no choice but to devise a plan to show him who is boss, she is also being given away to some noble Lord Crevan she doesn’t even know.

She’s told to venture the woods at a certain time, always a certain time, so that she may meet him. Only, she’s trapped once she gets there. At once she meets horrifying golem creatures, birds that have human flesh and speak? They’re warning her and then along the way she meets a little hedgehog who becomes her companion.

From there she finds the house and meets the rest of the household, all of Lord Crevan’s wives. Some are worse off than others and from here we begin to see Rhea really delve into herself, she begins talking to herself more which switches up the writing style and to me it is a little distracting. I wasn’t keen on how much she went into herself to talk because I felt like there could have been more story written instead.

Times ticking away, and it’s unknown if Rhea will find her way out of this marriage or if she is doomed to suffer or die at the hands of her husband to be.

In the end, this really is a little gem of a creeptastic book. I did enjoy it, it’s a quick easy read, but there are those few things that I wasn’t keen on. The internal monologue took away from the current events quite a bit, I would have liked to see some more of Lord Crevan’s evil doings and not simply from his wives.